Racing Gets Hot in Roslyn, Washington

Brutal. I’m talking about hot, muggy, end-of July central Washington weather. I’m also talking about how I felt by the end of my last lap on the Roslyn MTB Festival course this past Sunday (July 26): brutalized.

With proceeds from the race going to benefit the Roslyn Library, sweating a bit for only 18 miles (22+ if you count the practice lap) seemed like a minor sacrifice. Ah, the blissful optimism that gets crushed and kicked around by hindsight.

The place: Roslyn is a tiny town (population ~1,000) near Cle Elum, Washington (also a tiny town). Primarily known for its cameo in the “Northern Exposure” television series’ opening credits, Roslyn was hopping with cross-country mountain bikers this weekend.

The conditions: By 2 pm Sunday afternoon, the arid terrain was radiating heat. It was a mere 94 degrees, but in the thick of the woods, it felt like a stifling 110. By the time the pro/open categories got underway, the switchback descent portion on the backside was “technical” by virtue of it having become a dustbowl. But we aggressively-hydrating riders were game for it. 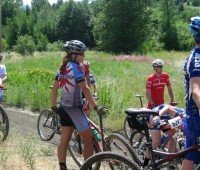 The course: Everywhere you looked, and everywhere you rode, there was dirt, dust and sand. Riding behind someone won you a lungful of fine dust, which you were sure to be coughing up later in the day. The first half to two-thirds of the smooth-rolling course traveled in the Up direction, but after the steep climbing sections and an intermission or two of snaking descents, you found yourself flying downhill, the dust flurries gusting off your wheels. One lap down. Repeat.

The race: After feeling strong for the first half of the race—maintaining the lead for most of the first lap and settling into a close second for another lap or two—the sun pointed its blazing finger at me and said, “Die.”

By the final lap, it was all I could do to keep making little circles with my feet while trying to convince my stomach it really didn’t feel that bad. I kept it together and finished the race in second—not as strongly as when I began the race, but stronger than how I felt when I began that last lap. Grimy and dust-covered, I sped down the final express descent, knowing my Sobo and I had put in a solid day’s work together. On the men’s side, Toby Swanson of Benaroya Research Institute placed first, and BRI teammate Eric Atwood came in second.
Post-race: On the drive back to Seattle, a friend and I stopped for dinner at Rogue Brewery in Issaquah, and my friend ordered one of the special brews called Brutal Bitter. As I tasted it, I felt quite satisfied. A brutal ride isn’t all that bad, once it’s over:)