A River Runs Through It: A Wet, Wet Galbraith Keeps Its Flow (Bellingham, WA)

In the Northwest’s rainier months (that is, about eight months out of the year), parts of the Galbraith trail system can become a virtual water world… but don’t worry; for the most part, the riding’s just fine.

Just because some of the trails turn into streams (free mud baths for everyone!) doesn’t mean there isn’t fun to be had in the foothills of Bellingham, Washington. I took this picture a couple of months ago of young Cory riding his bike down a gushing stream alongside the fire road climb up Galbraith Rd.

For some reason, Cory thought he could roll the steep bank down into the rocky stream. (Somebody get that boy a physics teacher, stat!)

For those who haven’t visited Galbraith in a while, there are new and improved lines that just might surprise. Here, Brian drops into Unemployment Line, a wide, bermy, machine-built trail:

No doubt you’ll run into someone you know–or perhaps meet some friendly strangers on the trail, like Robin and Nick.

While building improvements continue at Galbraith, some trails never seem to change; Evolution, the classic descent from atop the radio tower, is as impressive as ever, with rampwork features that emerge from the forest like an Ewok village.

Of course, some trails are better than others in the moister months. You’ll want to avoid trails that tend to flood when its wet, like the  Whoopsie Woodle XC trail, which understandably loses its flow when it happens to be several inches underwater. (And riding in those conditions can’t be good for the trail–I certainly won’t be riding that one anytime soon). 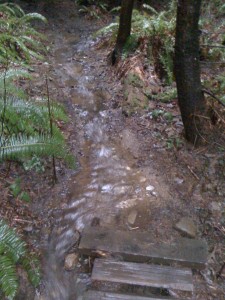 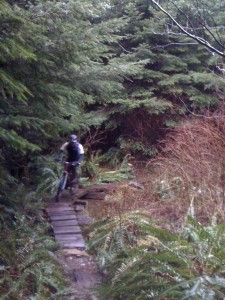 A convenient place to park when you’re riding the trails on the south side is in the Upper Lake Padden parking lot just across from Galbraith. Directions: From northbound I-5, take the North Lake Samish exit (#246) and turn left onto Samish Way. Continue approximately 100 feet past the Samish Way/Galbraith Lane intersection and park in the lot on the left. From the lot, it’s a nice spin across the street and up Galbraith Lane to connect with the fire road/main access to the trails.

Be sure to look for the bike-oriented scenery and architecture along the way, like the grand “door to nowhere” that features fine chainring and crankarm detailing. 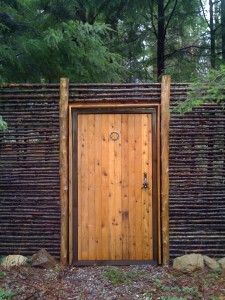 You’ll appreciate the trailhead map provided along the way (on Road 2000/Tower Rd.) There are also maps available for download online–or buy one in Bellingham to support a local bike shop). Here’s one that highlights a few of the trails:

When route finding at Galbraith, there are the convenient rock landmarks, painted blue, red and yellow, respectively, to remind you to “duh, turn here” when your body and brain are overtired. Ride to the right of the blue rock to access Road 3000 and most of the south side trails.

Further on, pass to the right of the red rock to access Unemployment Line (or go left to take Mullet into Cheech and Chong’s and Safety Break for a wild ride).

If you want to access Evolution, stay on Road 3000 (passing by Unemployment Line) until you turn left at the yellow rock and head up the fireroad, staying left until you hit the radio tower and then Evolution.

The trail signage is great at Galby–not only for route finding, but also for making bikers feel important. That’s right; bikes may be banned on singletrack in other uncivilized places, but in Galbraith, it’s horses and hikers who need not apply:

If you arrive in Galbraith from out of town and find yourself a little unprepared, just thank the trail gnomes for their foresight. The trail-side tool shop is just what any unprepared rider needs. 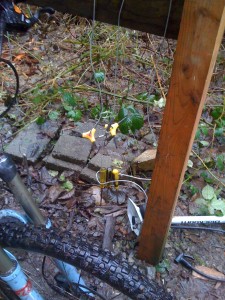 Here’s what those ladders and jumps on Mullet, Cheech and Chong’s and all the other fun trails look like before they’re born–just a stockpile of wood in a builder’s eye:

Rain or shine, if you’ve got the day off, it’s a clear sign that you should be heading to Galbraith.

See you up there!

I have many practical skills. I have a PhD in Medieval Literature. I can solder an LED hula hoop. Oh, and I ride and write about bikes.
View all posts by angelarides →
This entry was posted in Bellingham trails, Biking, Washington (Western) and tagged Bellingham, Cheech and Chong's, Evolution, galbraith, mountain biking, Mullet, Safety Break, Unemployment Line, Washington, Whoopsie Woodle. Bookmark the permalink.

2 Responses to A River Runs Through It: A Wet, Wet Galbraith Keeps Its Flow (Bellingham, WA)